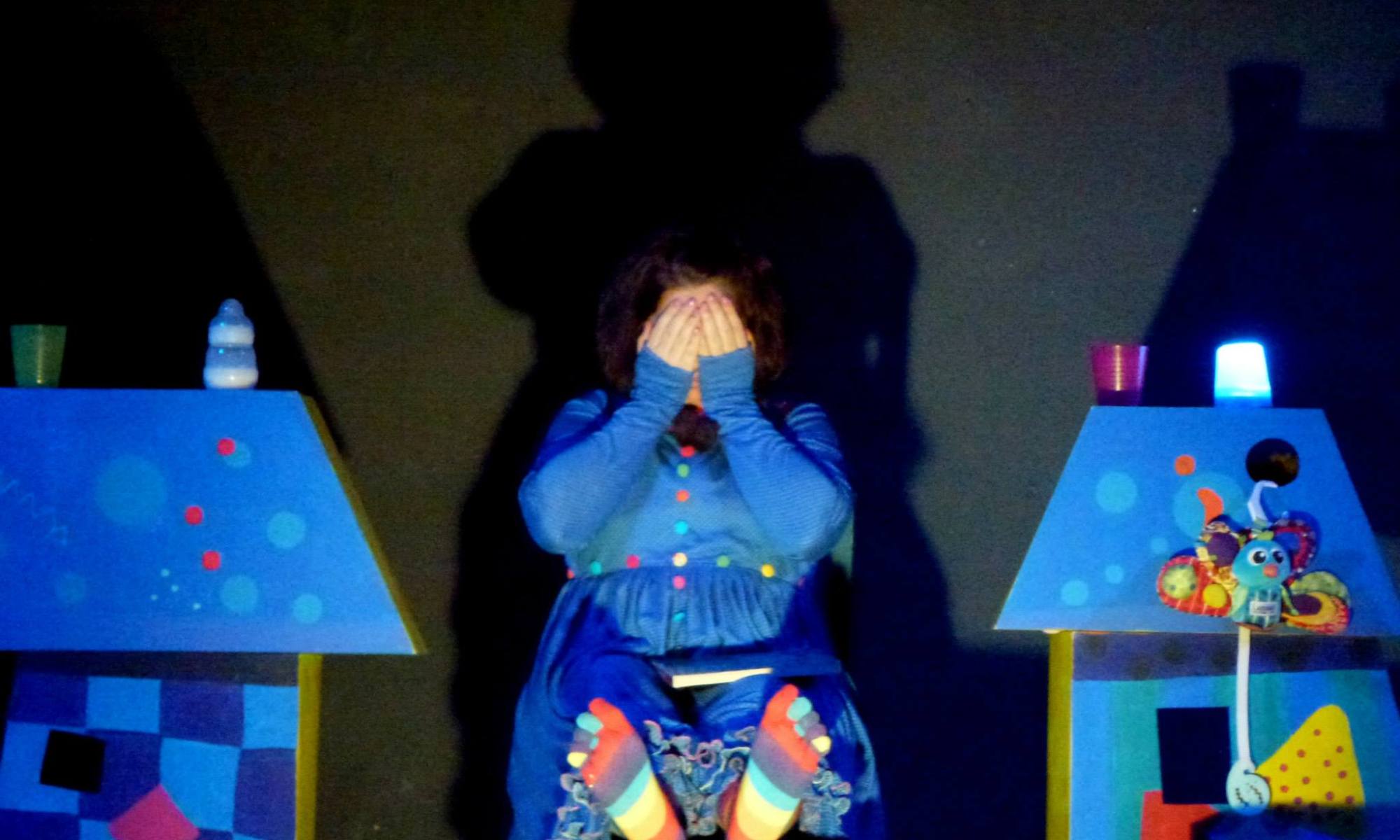 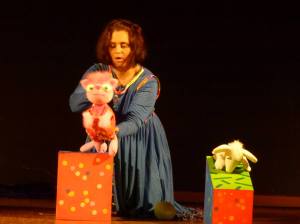 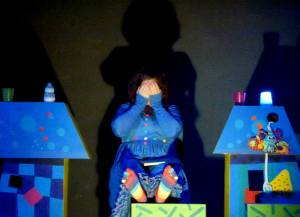 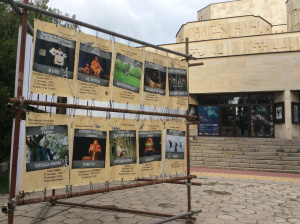 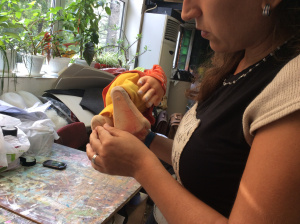 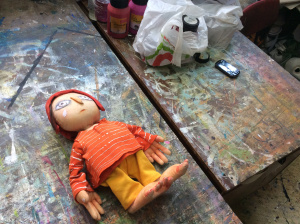 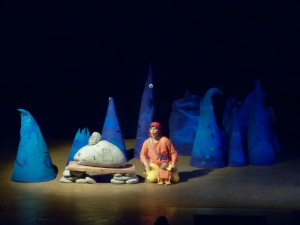 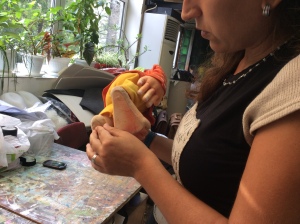 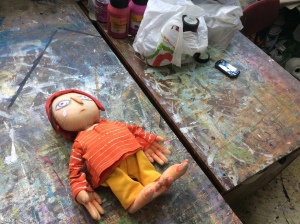 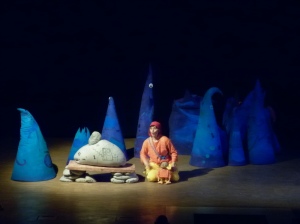 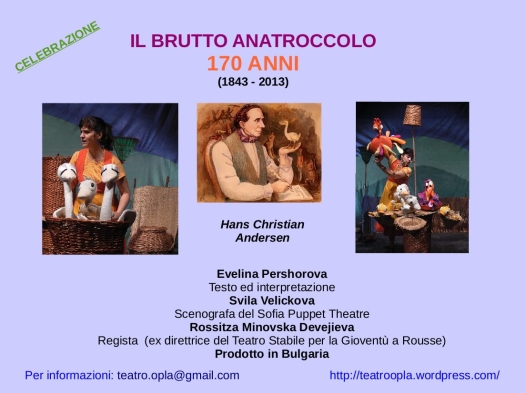 Born in a flower

taken from a tale by H. C. Andersen

A tale of initiation, a story to enter the great river of life. A barley seed, a flower and a tiny, little girl. As small as a dewdrop, as a bread crumb, as an ant.

Not higher than a pinky and yet able to face an adventure that drags her literally into a world very different from that delicate and perfumed flower in which she was born and from the shell in which she was laid upon by her mother.

Kidnapped from home, Thumbelina is jolted into a quagmire, and from the muddy pond of the frog to the tree of the beetles, from the solitary wood to the underground lair of the rat , from the dark tunnelsof the mole to the back of the swallow, she faces the stages of initiation into life. Each encounter is a challenge that tests her capacity to be herself and to listen to her heart.

And Thumbelina never betrays her heart for a piece of bread, nor her nature, for a velvety fur and a warm shelter.

She remains faithful to her heart, and completes a circle that brings her back to herself, never withdrawing, moving instead towards her centre, her true home, the Country of the Sun where other creatures akin to her are waiting for her and will accept her lovingly. There she discovers she is able to fly … And that country looks so much like the house where her mother has been waiting for her for a long time …

Between the folds of a huge sheet on the move, changing now into a flower, now into a garden, now into an underground lair, or into a flying leaf, an actress lives and tells the story of the small creature born from a seed of barley. In a continuous game of images and actions, she evokes every place and every character of Thumbelina’s journey of initiation, accompanied by fascinating sounds, voices, and musics.

“Born in a flower” is a tale about self-discovery and finding inner strength,remaining truthful to who you are.

by and with Evelina Pershorova

puppets made by  Sofia Puppet Theatre

We will tell the exciting story of the ugly duckling that after so much suffering turns into a graceful swan.

After leaving the environment that saw him being born, because of the intolerance of the other animals around him, the little duckling, so different from the others, goes in search of fortune.

And he is rewarded.

With this project we will try to answer to all the questions that the little duckling asks himself. Doubts and uncertainties that arise within him by growing guided only by himself.

While seeking the reasons of the behavior of the other characters, we will talk about diversity, tolerance, friendship and beauty, from the point of view of every character in connection with these great values. Trough this story,deep human values are conveyed in a way suitable for children.And they will learn, for example, that people should not be judged for what they have but seen for what they are,  that  acompassionet heart is a great achievement, that to help those who feel different and may be inadequate is proof of maturity and love.

The dramaturgy  remains faithful to the original story ,avoiding any gratuitous modernization. The meetings through the ugly duckling and the main characters are strictly narrated by underlining  the path of transformation of the main character  into a beautiful swan. The show is proposed with a language and ways of acting tailored to children. By portraying the various characters the actress narrates and emphasizes the actions with nursery rhymes and songs. The scenography, underlining the poetry of the story, will allow the young spectators to witness the magical transformations of simple everyday objects into animated images. By means of the theatrical game made of alchemies,  the staging  also aims to stimulate creativity and imagination.

stage or platform 6x6m, even outdoors in protected site

BY AND WITH EVELINA PERSHOROVA

The show I? Tom Thumb! follows the journey of initiation of a child as big as a thumb, but smart and cunning, and of his six brothers. By speaking of Tom Thumb of Charles Perrault is often used the expression “abandoned in the woods”, but we support  the hypothesis that it is not an abandonment, but rather a request for help from the Divine Providence, to a good soul or even better to a wealthy  and merciful family, willing to take care of those children, so unlucky to be born poor.

In this adventure Tom Thumb, the “green little bean born yesterday”, will discover himself as a great strategist and charismatic leader capable of conducting his elder brothers and teaching them the art of survival: in the woods they will learn to gather berries, fruits, leaves, barks, to make fire, to eat ants, to shelter themselves with what nature provides.

That’s the aspect of the story we’ve focused our  attention on: the abandonment in the wood will become stimulus to grow, to mature, to learn and to undertake the journey to adulthood. The encounter with mother ogre will be a funny hide-and-seek game, while the ogre, in her monstruosity and cruelty, will be defeated . Nothing will be missing of the famous fairy tale: Tom Thumb will find the way back home, but he won’t stop there, because having matured trough his experiences he will continue his journey. In “I? Tom Thumb!” we want to lead the small viewer to identify with a character to whom woods, ogres and solitude do not evoke fear, we want our children to feel courageous and able to face any obstacles .And finally, we want to emtertain them and make them laugh!

The original scenes, created by the Bulgarian set designer Velichkova, play an important role in the show, bringing an aura of magic and mistery, with a surprising novelty and originality.

SHOW FOR AN ACTRESS, AN ILLUSTRATOR, AND 6 WATER BUCKETS

“In the beginning I was a tiny baby: a pale blue thread amidst the grass and the leaves of the mountains … I began to grow gradually. I enjoyed listening to the muzzle of the cows that were drinking.The legs of the ducks floating in the river were tickling me.. I went, I went … (from the book of illustrator Gek Tessaro.)

With this project we’ve succesfully combined  severallanguages (Word, body movement, music and live painting) to enact/paint a story. The story of a brook that grows, grows up to become … the  ocean: “large and everywhere”. Just like the story of each and every human being growing, growing … Stretch your legs and arms, the arms reach the sky, the head is filled with thoughts and they are no longer children,  they have become big! We’ll tell this story,every child’s story, with lightheartedness, enthusiasm and joy, blending the color to the music and vocals to dance like that sort of big water game we call life. This show was born from the idea of illustrating/tell a journey, the journey that makes the water; the water cycle, the cycle of life. “It’s a journey that never stops (…) clouds become rain, rain becomes rivers, rivers pour into the ocean, clouds are born from the ocean… So goes the water cycle, so goes the world. ”

Inspired by the book “History of water” by Gek Tessaro this theater play is  a dance, a drawing, a celebration of this great force of nature. The plot is simple: water, a small drop, tells its story from the time it was in the belly of mother  cloud. Diving in an overflowing creation of images, painted live on stage and projected from overhead, Water interacts with the characters it meets along its journey, with whom it plays, sings and travels towards the sea. It is along this path that the small drop will become  a stream before becoming growing into a river, sea and ocean. This evolution is used as a metaphor of living and growing. Using natural elements,such as earth, water, fire, we create an atmosphere full of perceptual sensations, bringing everyone to imagine places and events full of beauty and simplicity. Last but not the least, an evoking soundtrack  adds a flavor of distant lands,accompanying “real”language and invented or foreign words.

This story, the story of Water, our story, is told with lightheartedness, enthusiasm and joy, mixing colors with music and words with dance, like in that sort of infinite play of water which is life.

darkening of the hall: necessary